Seventy-seven teams who entered this season’s Champions League tournament have been whittled down to just eight, with all of them now beginning to believe that it could be their year. A few of the most prestigious and famous clubs in Europe are still standing, but somewhat surprisingly, there is NO English team in the last eight. Liverpool failed to make it past the group stages, while Arsenal, Chelsea and Man City all suffered exits in the last 16. There is no English team in the last eight of the second tier Europa League competition either (first time it’s happened in over 20 years!), but that’s a subject we’ll touch upon later.

If we analyse the quarterfinalists, we can see that Spain have three- Barcelona, Real Madrid and Atletico Madrid. Bayern are the solitary German team standing, with Dortmund, Leverkusen and Schalke all bowing out in the last 16. France, whose stocks in international football have fallen in the last decade, surprisingly have two clubs- Paris Saint-Germain and Monaco. Portugal and Italy have one representative each in the form of Porto and Juventus respectively. 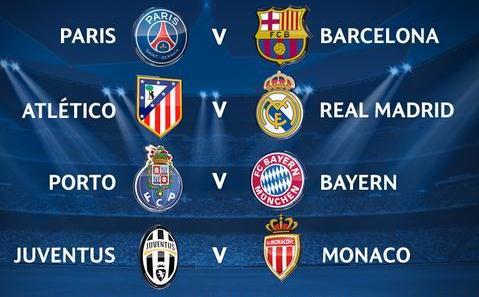 Which one of these eight will be crowned champions in Berlin?

Berlin awaits for two of the quarter finalists who produce the quality when it matters and make it all the way to the final in May . Knock-out football however has a tendency to be unpredictable and throw up surprises along the way.

With so many of Europe’s strongest teams remaining in the Champions League, it is extremely difficult to pick a winner from any of them. The team who shows the most quality and produce match-winning moments at the crucial times will ultimately prevail in Berlin, but there is no guarantee that any of the favourites are guaranteed to make it past the quarter final stage, let alone reach the final.

It is hard to look past Bayern Munich as strong favourites, with Pep Guardiola transforming the Bundesliga side into one of the most feared in Europe. Putting seven goals past Roma and Shakhtar Donetsk perfectly illustrate their unerring ability to put teams to the sword, while 8-0 and 6-0 victories against Hamburg and Padeborn respectively highlight just how dominant they at in the German top flight. Any team with the likes of Manuel Neuer, Robert Lewandowski, Arjen Robben and Thomas Muller are always within a chance of winning the Champions League, particularly as they continue to banish the demons of last season’s semi-final humbling at the hands of Real Madrid.

La Liga rivals Barcelona and Real Madrid are also heavily fancied to go all the way, with the latter hoping to retain their title. Based on current form, Barcelona appear the most likely to be strong Champions League contenders, with Luis Enrique enjoying a superb run of seventeen wins from their last eighteen fixtures in all competitions. They overcame a brave challenge from Manchester City to reach the quarter-finals, and if Lionel Messi continues to perform at the height of his abilities, then there is every reason to back Barcelona. The same could be said of Cristiano Ronaldo and Real Madrid, but not only were they extremely fortunate to progress against Schalke after an awful 4-3 defeat at the Bernabeu, there is clear evidence that all is not well between the fans and the players.

Juve are of course Italian champions, and it helps that the national team won the World Cup in Germany, way back in 2006. Atleti seemed to have developed an uncanny ability to get the better of Real in recent times, and if they can beat Los Merengues in the quarters, Diego Simeone’s men could go a long way in avenging last season’s final loss.

Although Atletico Madrid and Juventus should rightly be considered dark horses to win the Champions League, it is perhaps understandable that Monaco and Porto are rated as rank outsiders. The former should receive a lot more praise than they have for the manner in which they essentially won their tie against Arsenal in the first leg at the Emirates, but Leonardo Jardim’s team do not have the overall quality than many of Europe’s big hitters do.

However, what Monaco do possess is a wonderfully resilient defence which does concede many goals, allowing the likes of Joao Moutinho and Dimitar Berbatov to pull the strings further up the field. It could be argued that Porto should also be considered as a potential dark horse to go all the way, but not only have they yet to be tested by a European giant this season, Julen Lopetegui’s side are often written off due to the level of their domestic league. Their quarter final opponents, Bayern Munich, should not be fooled by Porto playing in the Portuguese top flight as they have proved their strengths and qualities in Europe over the last few years, but coming up against the mighty Germans may prove to be a step too far.

And don’t forget- Monaco and Porto contested the finals of this very competition back in 2004, one in which the Portuguese, then coached by Jose Mourinho, won 3-0.

It remains to be seen which team rises to the top and makes headlines as they lift the famous trophy aloft in Berlin, but four mouth-watering quarter final ties promise to produce high quality football that is not only fitting of Europe’s most prestigious domestic-based tournament, but also put the winners one step closer to glory.

My tips for the quarters- Bayern, Atletico, Juventus and Barcelona.