We started with 78 teams and are now down to four- Real Madrid, Manchester City, Bayern Munich and Atletico Madrid. Barcelona’s surprise exit at the hands of Atleti ensured the continuation of the holders’ “curse” in the Champions League- no team has won back to back titles in the competition since AC Milan did it in 1990.

Will Real, with their fragile defence, go through thanks to the power of their BBC trio? Will Milan see Pep Guardiola’s current team taking on his future one next month? Here we take a look at the two intriguing semifinal lineups 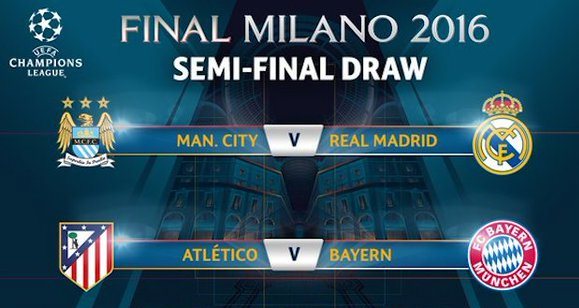 Not many expected the blue half of Manchester to topple France’s very own dominant force in Paris Saint-Germain, but City were able to call on their own financial muscle with club record signing Kevin De Bruyne firing Manuel Pelligrini’s side into their first ever Champions League semi-final. This was far from what the bookmakers had been predicating, with Champions league predictions at thatsagoal.com expecting PSG to be too strong for the Citizens over both legs.

Conversely, 10-times European Cup winners Real Madrid required another herculean display from their goal machine Cristiano Ronaldo whose sensational hat-trick in the return tie against Wolfsburg saw them recover from a shock 2-0 first leg deficit and reach the last four of the competition for the sixth consecutive season.

Like their quarter-final, the Citizens will go into the encounter as underdogs. However despite the significant contrast in history between the two clubs in the European Cup, City will take some kind of optimism from the way Wolfsburg outplayed Los Blancos in Germany.

Both teams possess world-class strikers in Ronaldo and Sergio Aguero respectively with Ronaldo’s last-minute winner giving Madrid a thrilling victory over City in a pulsating Champions League clash at the Bernabeu during the 2012/13 group stages.

Aguero rescued a point for City in the return clash, but it will be the Portuguese star that is going to take some stopping having already plundered 16 goals from just 10 appearances in the competition this season.

Real’s defence does look fragile and if Wolfsburg could beat them, City most definitely can. However this could be a case of who ends up scoring more, and you’d have to back, atleast on paper, the wealth of firepower available to Real boss Zinedine Zidane, who can call upon the likes of Ronaldo, Benzema, Bale and James to prise open City’s back four.

With Barcelona faltering in the league, Madrid have been blessed with an unexpected but realistic opportunity of picking up silverware on two fronts. Momentum is with the Spanish side and even their own manager has put pressure on his side by affirming to Sky Sports that his team are favourites. The French World Cup Winner acknowledged: “Madrid are always favourites, and always will be. But we know how difficult it is to play a Champions League semi-final against Manchester City.”

Another factor in Madrid’s favour is that they host the return leg. In the pressure cauldron of a European semifinal, that’s a significant advantage to possess.

Diego Simeone has performed wonders at the Vicente Calderon since being appointed manager in 2011. The Argentine, famed for his spat with David Beckham in the 1998 World Cup has been able to inspire his side to constantly challenge the colossal powerhouses in both Spain and Europe. After knocking out the seemingly invincible Barcelona in the last round, Simeone will face another task equivalent to ‘David vs. Goliath’ proportions when Pep Guardiola brings his Munich side to the Spanish capital. With a fourth successive Bundesliga title looking highly probable, the soon-to-be Manchester City manager will be hoping his team avoid elimination at this stage of the tournament for the third consecutive year.

The omens are strong for Atletico with Spanish opposition defeating Bayern in the last two seasons, both of whom went on to lift the trophy. Two years ago Atletico were seconds away from lifting the trophy against arch rivals Real and a rematch between the pair is just one of the potential outcomes.

Bayern will have to overcome the discipline and doggedness of Los Colchoneros whose indomitable spirit enabled them to pull off another famous scalp against the famous scarlet and blue stripes of holders Barcelona.

Atletico are the team everyone wanted to avoid in the semifinal draw- while they don’t score many, their defence is very, very good and any team that’s kept MSN at bay deserves to be respected. In many’s people’s words, they’re an “irritating” team to play against, with that word signifying a high amount of respect for Los Colchoneros. Bayern’s away form in Europe under Guardiola isn’t too flash either, and Atleti will certainly fancy their chances against the Bavarian giants.

Simeone will need to prepare his team meticulously to thwart Robert Lewandoski who remains one of the most feared strikers in world football. Philipp Lahm will break Oliver Kahn’s German record of 103 Champions League appearances should he start on Wednesday night.

Can Bayern succeed where Barcelona failed and break down the stubborn defence of Atletico? Simeone will happily play for a goalless draw in the hope that the likes of Antoine Griezmann and Koke can nick a goal at the other end.

Like with Real, Bayern have the advantage of playing the return leg on home soil.