The first Friday game of the new Premier League season takes place tonight as Southampton travel to Old Trafford to take on Manchester United. Jeff Stelling and Rachel Riley will be hosting the Friday Night Football Show on Sky, who will be showing ten Friday games this season as part of a new rights deal inked with the Premier League.

United v Southampton is the first of those, with Chelsea’s home clash against Liverpool (September 16) being the next one in line. Paul Pogba is expected to make his first appearance for the Red Devils following his record switch from Juventus.

The new PL television rights deal is worth a staggering £5.1bn (effectively worth £30.4m per game), a whopping ten fold increase over the £3m per game paid by Sky when the league began back in 1992

Leagues in France, Germany, Holland and Spain already telecast games on Friday to take advantage of television audiences, and this brings the PL in line with their European counterparts. 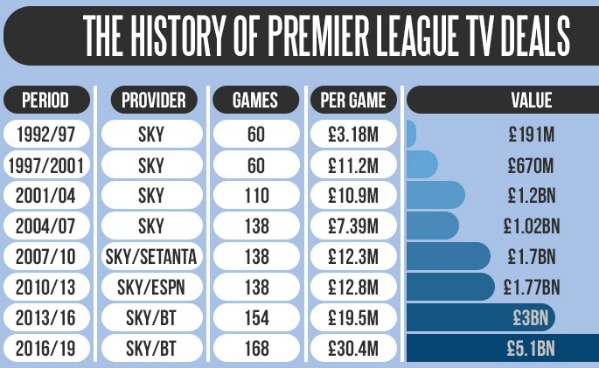 United began the Jose Mourinho era last week with a 3-1 away win at Bournemouth, courtesy of goals from Juan Mata, Wayne Rooney and new superstar signing Zlatan Ibrahimovic. The Red Devils are currently top of the table on goal difference, with no other team managing a win by more than a single goal on Match Day 1.

Fellow rivals Man City needed a slice of luck to overcome David Moyes’ Sunderland on the opening day of the season, with Black Cats substitute Paddy McNair scoring an own goal on 87 minutes to hand the Citizens a narrow 2-1 win. It was not the type of performance that Pep Guardiola would have been very happy seeing, and the former Barca and Bayern manager remarked after the clash that he realised “how difficult it is”

Like City, Chelsea also left it late to beat West Ham, with Diego Costa netting the decisive goal a minute from time to hand new manager Antonio Conte a winning start at the Bridge.

A look at the football odds for the 16/17 Premiership season at Paddy Power tells us that City, United and Chelsea are the favourites to claim the title, with Leicester not really expected to repeat their miracle triumph from last season.

The Foxes had a disappointing start to their title campaign as they went down 2-1 to newbies Hull City. They are also the first defending champions to lose the opening game of the season since the inception of the league.

The pick of the weekend’s games was Liverpool’s 4-3 win over Arsenal, with both of Jurgen Klopp’s new summer signings- Gregory Wijnaldum and Sadio Mane, playing pivotal roles in the victory. It was another disappointing start for Arsenal, with their defence in particular exposed by the Reds as they shipped in four goals in 18 minutes.

Boro opened their campaign with a 1-1 draw against Stoke, with Saints-Watford and Everton-Spurs also producing similar results. Burnley didn’t enjoy the same luck as their fellow promoted sides after losing 1-0 to Swansea. West Brom produced a dogged performance to win 1-0 at Palace, with the latter continuing their poor form from the latter half of the 15/16 season.