The Premiership resumes this weekend after a two week international break and a tasty fixture this weekend pits leaders Manchester City against Ronald Koeman’s Everton at the Etihad.

City suffered their first league defeat of the season when they lost 2-0 to Spurs just before the break while Everton have also hit a bit of a bump after a cracking start, with a loss to Bournemouth and a draw at home against Crystal Palace in their last two league fixtures. 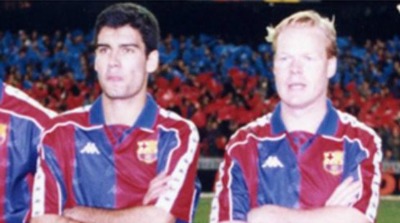 Koeman and Guardiola in their playing days at Barcelona

Everton boss Ronald Koeman and City gaffer Pep Guardiola go back a long way- they were room-mates when they played for Barcelona under the legendary Johan Cruyff, but the two friends will now be locking horns on the football pitch as managers.

There is plenty of good news for City, with high expectations around the Etihad that Guardiola will be able to call upon the services of both Sergio Aguero and Kevin de Bruyne for this clash against the Toffees. Aguero suffered an adductor injury last weekend in Argentina’s 2-2 draw with Peru, but was able to play the whole 90 minutes against Paraguay in midweek.

De Bruyne suffered a hamstring injury in City’s 3-1 win over Swansea and the two games he’s missed have been the ones in which City have dropped points- the 3-3 loss to Celtic that stopped their run of consecutive wins over Guardiola, and the 2-0 loss to Spurs. That underlines his importance to the team, and Guardiola, who has said that the Belgian is only “second to Messi” will be encouraged by the news that his chief playmaker’s hamstring is healing faster than expected.

Like with De Bruyne, Everton have also missed a key player in their two most recent setbacks- defender Leighton Baines. The 32 year old leftback is expected to replace Bryan Oviedo, who deputised for hm in the Bournemouth and Palace fixtures. Everton have the second best defensive record (only 5 conceded in 7 games) in the Premiership after Spurs, while City are the best attacking side in the league at this stage of the season along with Liverpool (18 scored in 7 games)

A look at the freesupertips.co.uk Twitter page tells us that City are favourites and perhaps rightly so- Everton’s last win at the Etihad came back in 2010.

The referee for this game is Michael Oliver. In the last eight games Everton have played with him in charge, the Toffees have lost just one. They are just four points behind City in the league table going into this game and a victory at the Etihad will see that gap being cut to a single point.

The most recent meeting between the two teams took place in the League Cup in January earlier this year, with City triumphing 3-1 after Ross Barkley had put Everton ahead.