Manchester United may not be doing well on the field currently, but they’re certainly doing well off it, and the club, which enjoys tremendous fan following in India, has partnered with local bank ICICI to launch co-branded credit cards. The Man Utd ICICI Bank CC comes in two versions- platinum and signature, and here we’re reviewing the platinum version.

Renewal fees waiver: Annual fee on this Man Utd ICICI platinum card will be waived on annual spending of INR 125,000

If you’re among the top 70 monthly spenders (across United visa platinum and visa signature credit cards), you’ll get a Man Utd branded t-shirt.

If you’re the TOP monthly spender (across both platinum and signature variants), you’ll get a signed Manchester United jersey and a match ticket.

15% discount on dining at select restaurants
1% waiver on fuel surcharge on spending more on INR 4,000 at HPCL gas stations (and only on ICIC swipe machines)
Buy 1 ticket, get 1 one free on BookMyShow (2 tickets upto INR 250 per ticket)

Verdict: a decent card if you’re among the top 70 spenders, but otherwise not really much going for it, given the reward rates. Surprised they haven’t introduced milestone based accelerated rewards. The 1 lounge visit is a nice feature, but otherwise, you’d get more bang for your buck elsewhere in the market.

(This article has been written by one of our readers, a Manchester United fan from India, who also happens to love collecting credit cards) 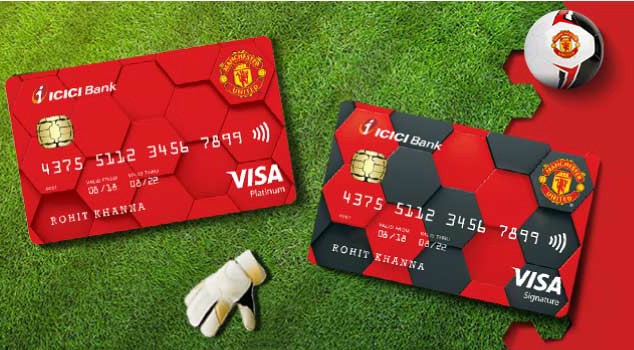