The eighth gameweek of the Premier League, the last before the international break, saw a three way tie at the top of the table after Chelsea beat Southampton 3-0 at St.Mary’s and Liverpool and Manchester City played out a goalless draw. The Blues, the Reds and the Citizens all have 20 points after 8 games, but Jurgen Klopp’s side have slipped to third on goal difference.

Both Liverpool and Man City had conceded only three goals each in their previous 7 games, and seemed intent on not letting that figure change. Fans might have expected a high scoring encounter (like the 4-3 from last season), but had to be content with a goalless stalemate. 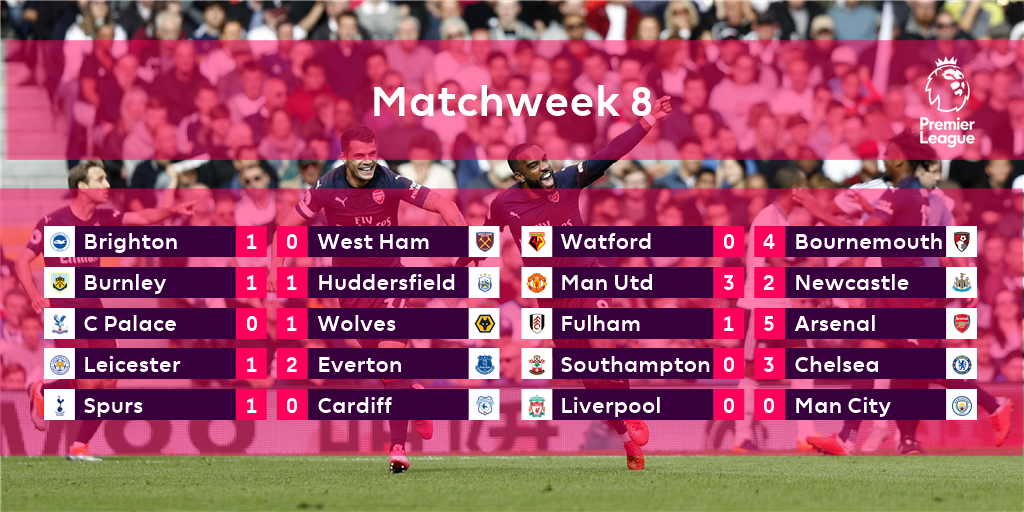 At the other end of the table, Cardiff remained rooted to the bottom, while Newcastle were within 20 minutes of potentially rendering Jose Mourinho jobless before the Red Devils got their act together and managed to win 3-2

Arsenal continued their revival under Unai Emery with a sparkling 5-1 thrashing of Fulham, with the icing on the cake coming in the form of a beautiful team goal finished off by Aaron Ramsey.

Everton managed back to back wins for the first time in the league this season as they beat Leicester, while Bournemouth and Wolves continued their impressive start to the season with away wins over Watford and Crystal Palace respectively. The MatchWeek started with Brighton’s 1-0 win over West Ham, breaking the latter’s 3 game unbeaten run, and ended with the Liverpool City game at Anfield.