First half goals from Karim Benzema and Fede Valverde and a second half stoppage time penalty from Rodrygo helped Real Madrid comfortably beat arch rivals Barcelona in the 250th El Clasico between the two great rivals. Aside from being the 250th Clasico, it was also the 100th one at the Bernabeu and Xavi’s 50th game in charge of Barca, but one the legendary midfielder will want to forget immediately.

The result saw Real open a three point lead at the top of the LaLiga standings, condemning Barcelona to their first league defeat of the campaign. The Catalans had more possession and more shots, but failed to create anything major of note- Andriy Lunin in the Real goal barely had to make a save.

It’s a disturbing trend for Barca though, and came on the heels of a 3-3 draw against Inter that leaves them on the verge of a shock first round exit from the Champions League. The game against Bayern, home and away against Inter and now the clash against Real- all big games where the Catalan giants have been second best to their opponents.

Indeed, Barcelona based papers MD and Sport soundly criticised the Blaugrana, with the former labelling the performance “painful” while the latter called it “soulless” 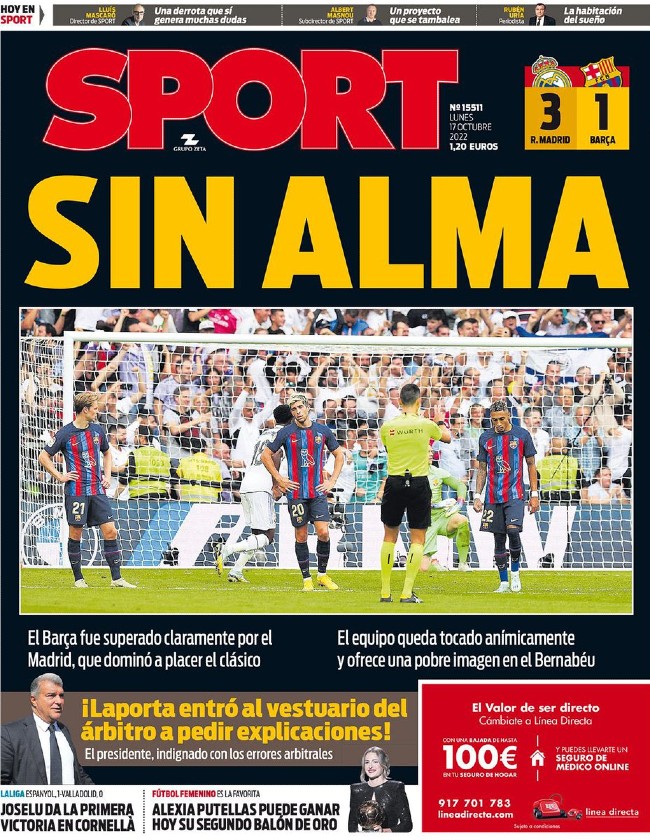 Barcelona are vulnerable on the counter, and that’s exactly how Real created their first goal, with Toni Kroos feeding the pacy Vini Jr on the left wing. The latter’s first time shot was saved by Ter Stegen, but the ball bobbled to an unmarked Benzema on the edge of the box, and he calmly slotted home. The French marksman was on a five game goalless run, and could probably not have picked a better game to end his drought.

Valverde doubled Real’s lead before half time, and Benzema then thought he had the ball back in the net for a second time, only for VAR to disallow the goal. In both cases, Barca’s defending left much to be desired.

Many have criticised Xavi for being too stubborn in terms of tactics- playing both Raphinha and Dembele together on the wings and not having Gavi in the centre of the park to name a couple. It’s perhaps telling that Barca improved once their substitutes- the likes of Ferran, Ansu Fati and Gavi, were on the pitch. The visitors pulled one back, with Torres netting from close range after some great work from fellow substitute Fati.

Just as Barca thought they had a chance, a poor defensive decision from Eric Garcia saw a penalty being awarded against the visitors, and Brazilian substitute Rodrygo coolly stepped up to convert the resultant spot kick and give Real a well deserved 3-1 win.