Gabriel Agbonlahor committed himself the last week to Aston Villa for another four years, signing a contract extension with the club he has spent his entire career. The 27-year old has been a key part of the Villa first team since breaking into the senior side in 2006 under David O’Leary, scoring on debut against Everton in March that year. While he may not have grown into the prolific goalscorer Villa fans would have desired following an explosive start to life in the Premier League, the forward has maintained his place in the team under a succession of managers that taken the helm at Villa Park and is now considered a senior figure in the squad.

Now under the management of Paul Lambert, Agbonlahor has come in for some criticism from parts of the Villa faithful in recent years due to a lack of goals. Blessed with blistering pace and decent movement, there is little doubt the striker should have scored a lot more than 68 goals in almost 280 appearances – not to mention more England caps than the three he has won thus far- his last Three Lions appearance was back in 2009. The striker’s four league goals last season summed up an underwhelming season for Lambert’s men in which the club were forced to settle with a 15th place finish. 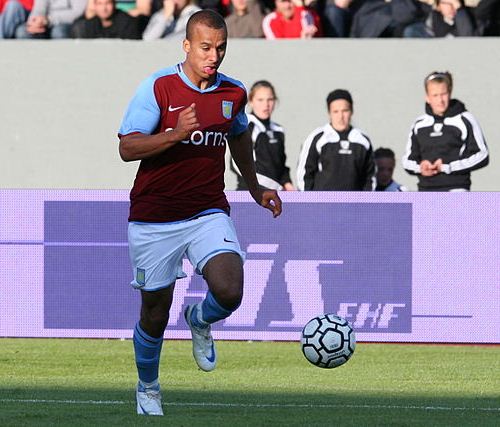 Will Gabriel Agbonlahor make up for a poor 13/14 season?

However Gabby has been fabulous so far in the 2014/15 season and will be hoping to progress in the same vein through the season. He opened his account for the season with the opening goal in Villa’s 2-1 victory over Hull City and then scored the goal that condemned Brendan Rodgers’ Liverpool to a shock defeat at Anfield. This great start to the season has Villa’s relegation odds lengthen with Betfair and some betting fans have even moved to back Lambert’s men as possible top-10 contenders, possibly due to the presence of Agbonlahor and fellow forward Andreas Weimann upfront for the Midlands side. Villa have been flirting with relegation for the last three seasons and they being pace setters at this early stage of the season is nothing short of unbelievable for their long suffering fans.

Agbonlahor scores to give Villa a famous win at Anfield- Video

Villa and Agbonlahor have both been through some highs and lows since 2006, but the striker insists he is determined to play a part in helping his boyhood club return to the top half of the table. And with his new contract all sorted, Villa fans will be rightfully feeling Agbonlahor owes them more than a handful of goals this season.

“It is good news for me to commit my future to the club and play the rest of my best years for Aston Villa,” he said. “It is a four-year deal. That is what the contract provides – it gives me the chance to play for such a big club for the next four years.”

“The last few seasons have not been to the level of the previous seasons for different reasons. But I am happy with the way I have started the season and I want to continue playing the way I am and hopefully I can continue playing in the side.”

Alan Hutton has also put pen to paper a four year deal and Lambert has said that he is hopeful that other key players like Ron Vlaar and Fabian Delph will follow suit soon.