It’s still a sore subject for all Manchester United fans out there.

Last season, one year after taking the Premier League title, the Red Devils had one of the most magnificent falls from grace in football history, finishing the league in seventh place while their arch rivals Manchester City took the trophy.

Just one year after signing up as manager on 9th May 2013, Moyes was promptly asked to get his coat after he failed to continue the success of former manager Sir Alex Ferguson. He was hated by his fans and was quickly replaced by Louis van Gaal during the midst of the World Cup events, who promised a “new era” for the team.

As yet, no such dream has been fulfilled, and Manchester United find themselves in seventh place once again after a string of embarrassing losses this season. This beggars the question: did David Moyes really deserve all the negative press he received? And is Louis van Gaal any better a manager?

At present, Moyes is putting the past behind him and has set his sights on pastures new – the former Preston North End manager has now been named the Real Sociedad manager. 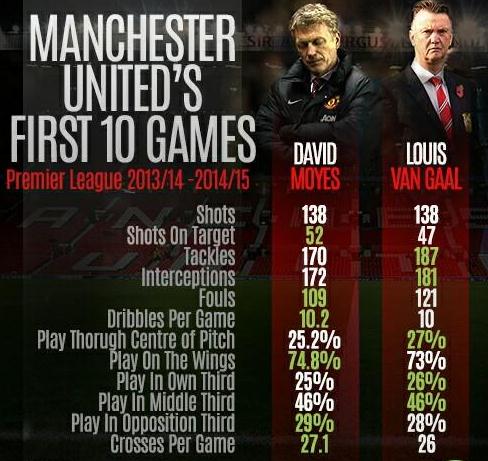 The Spanish team must have taken into account his whole career when considering him for the role – after all, this is a man who, despite failing to carry Manchester United, did get Preston North End promoted and also won 173 games for Everton during his time managing the teams respectively.

But despite this, there are those who are likening the Dutch star to former victor Sir Alex Ferguson. Ex-Manchester United midfielder Bryan Robson has said of van Gaal that his management style is more akin to that of Sir Alex than David Moyes. He told the Sunday World: “He is an intelligent manager with a plan. He has the support of the dressing room and we will see results within a year. He is more like Ferguson than Moyes.”

Van Gaal had better hope he is more like Sir Alex Ferguson with the team’s next upcoming match against Arsenal. In November 2012, Sir Alex managed to coach the team to beat the Gunners 2-1, but this time around, home team Arsenal are favourites to win with plenty of bookies, like Betsafe for example.

With so little faith in van Gaal, could it be that perhaps David Moyes got more flak than he deserved? Statistically, Moyes had spent less money by this time last year, and moreover, the team were doing far better at this stage in November 2013 than 2014. While van Gaal’s Manchester United have accumulated 13 points in their first 10 games this season, this time last year, they had acquired 17.

They may be in the same position now but van Gaal has a lot to do if he is to turn his fates around. He has however committed himself to three years with the club; Rome wasn’t built in a day, but Manchester United fans could soon be running out of patience.