Cristiano Ronaldo has won the Ballon D’Or for the second year running, pipping great rival Lionel Messi and Germany goalkeeper Manuel Neuer to again be named the World’s Best Player. Ronaldo played a pivotal role in Real Madrid’s Champions League triumph, and won the award with 37.66% of the total vote. Messi, somewhat surprisingly, only polled 0.04% more than World Cup winning stopper Neuer, finishing with 15.76% of the total vote to the Bayern star’s 15.72%.

Ronaldo has now won three Ballon D’Ors, one less than Messi, whose speech last night set tongues wagging about his future at Barcelona

In response to a question which asked whether he would end his career at Barca or Newells’ Old Boys, Messi said “I’m not sure what’s going to happen, whether I’d go to Newell’s. I don’t know where I’ll be next year although I’ve always said I want to end my career at Barcelona”

This, coupled with reports on his recent frosty relationship with Barca coach Luis Enrique, has sent activity at bookies like Vernons rising, with the likes of Chelsea, Man City and PSG all touted as potential destinations for the Argentine superstar. England is being spoken of in favourable terms because it would represent a new challenge, and Messi’s wife is a close friend of Daniella Semaan, the partner of Cesc Fabregas (ex Barca, now at Chelsea)

Enrique was one of several people who had a speech at the Ballon d’Or, and Messi, as the pic below shows, didn’t look very pleased to hear his coach speaking about him. 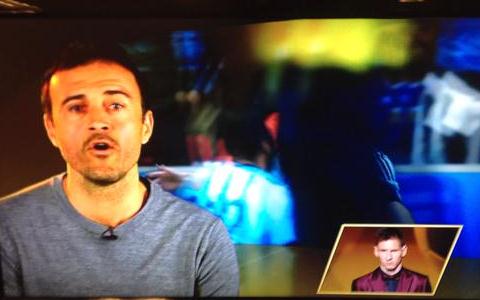 However the stumbling block in any move would FIFA’s Financial Fair Play rules, with the Guardian reckoning Manchester United would be the only English club capable of paying his release AND staying within the fair play laws. Messi’s buyout clause (all Spanish clubs must compulsorily have a buyout clause for their players) has been put by Barcelona at 250 million euros (€250m) , and it is unlikely they will settle for anything less than that figure for their best, and in some people’s eyes, the Blaugrana’s greatest ever player.