The weekend was a great one for Manchester United fans. Not only did they beat Sunderland 3-0 but they also rose to the top of the Premier League table for the first time in more than two years. The win, coupled with Man City’s shock 4-1 loss at Spurs, saw United leapfrog their city rivals in the league standings. Anthony Martial has had a sparkling start to his United career, and £36m suddenly looks like a steal for the young French forward, instead of the overvalued panic buy that it seemed earlier.

Two weeks ago though, it wasn’t so rosy for United fans. They lost their Champions League opener against PSV in Eindhoven, and even worse, saw in form defender Luke Shaw hacked down by Hector Moreno, with the former now set for a long stint on the treatment table. To add insult to injury, Moreno even scored the equaliser in that game to cancel out Memphis Depay’s opener, and Luciano Narsingh’s second half winner ensured an unhappy return for Louis van Gaal to the Phillips Stadium. 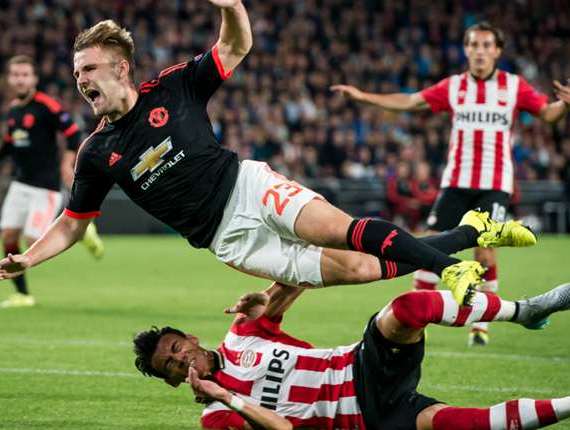 To their credit, United have not let the loss affect them, following it up with three straight wins. An impressive 3-2 victory at Southampton courtesy of two goals from new signing Anthony Martial, and a solo goal from Mata erased the memories of the PSV loss, and United then went on to thump Ipswich 3-0 at Old Trafford in the Capital One Cup last Wednesday evening.

Wolfsburg had a happy start to their CL campaign, as they bagged three points at home to CSKA Moscow. Julian Draxler scored his first goal for his new club in the first half following his summer switch from Schalke, and that would be enough to seal a 1-0 victory on the night.

However since then, the Wolves have suffered a slight dip in form. The win against Schalke was followed by a 2-0 against Hertha, but Wolfsburg’s morale was dented badly by Bayern’s 5-1 win, in which Robert Lewandowski scored five goals in nine amazing second half minutes. The loss to Bayern Munich with a 1-1 draw at home against bottom of the table Hannover on Saturday, leaving Wolfsburg nine points adrift of the leaders in the Bundesliga.

Given these factors, United will go into Wednesday’s game high on confidence, and will be ready to bag their first Champions League points of the season. Anthony Martial has been in sparkling form and his teammates are hitting their straps too. Depay, Wayne Rooney and Juan Mata secured a 3-0 victory over Sunderland on Saturday, a win that would have brought enormous delight to Red Devils fans, including those jackpot players who backed United in Coral’s competition. The football jackpot is a weekly competition where punters try and predict the outcome of 15 matches, with big money on the cards for those who succeed.

For those interested, United are 4/5 at Coral for a home win on Wednesday, whereas visitors Wolfsburg are a little longer at 11/4. The draw is currently seen at a chance of 9/4.

Wolfsburg’s last trip to Old Trafford, back in the 2009-10 Champions League season, ended in a 2-1 loss for the German side. Giggs and Carrick scored for United that evening, with Edin Dzeko netting for Wolfsburg. Wayne Rooney is United’s only survivor from that game.