Scott Dann became the first Crystal Palace player to score this year in the Premier League but the Eagles fell to a fifth straight defeat as Bournemouth came away with three points from Selhurst Park.

However that lead lasted only seven minutes as Mark Pugh, scorer for Palace’s FA Cup winner at Pompey over the weekend, netted a fine individual strike. Pugh first turned Dann inside and then outside before finding the back of the net with a low finish.

Bournemouth’s new signing Benik Afobe scored what was to be the winner just before the hour mark, heading home the rebound after Palace keeper Wayne Hennessey had saved Matt Ritchie’s initial effort.

While former Arsenal striker Afobe looks like the real deal for Bournemouth, their opponents are struggling to get the most of the ex Gunners strikers on their books. With Marouane Chamakh and Fraizer Campbell already present at Selhurst Park, Palace’s latest signing Emmanuel Adebayor made his bow as a second half substitute but was unable to conjure a winner. He had a great chance when the hardworking Zaha broke again from the left wing and swung in a delicious cross, but Adebayor could only find the side netting.

The Togolese hitman is certainly a class act when on form, but given his recent absence from the game, needs to be given time to regain match fitness and get back to his best in front of goal. 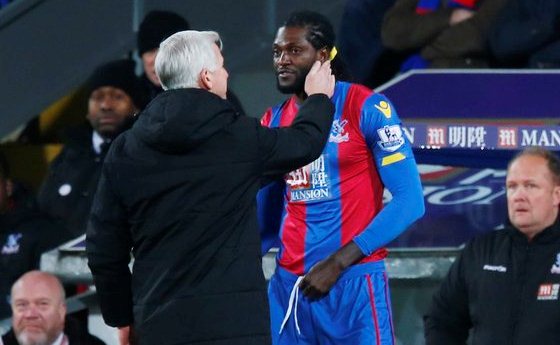 This was also a Premiership game played between two teams who have the same shirt sponsor- Mansion, the owner of Mansion Casino. One for the stats guys we say!

Unbelievable as it sounds, Palace’s main strikers (Wickham, Chamakh, Campbell, Gayle and now Adebayor) have managed just ONE goal between them in the league all season.

Things aren’t going to plan for Alan Pardew and the sooner he can get Yannick Bolasie and Yohan Cabaye back on the park, the better. Bolasie in particular is very integral to Palace’s chances, and it is not a coincidence that their horror run is coming at the time when he is unavailable.

As for Bournemouth, great result for them. Prior to this game, they had lost only twice in their last 11 league games. They are now seven points clear of the drop zone, and it will be mission accomplished for Eddie Howe if he can keep the Cherries up in their first season after promotion.