The Premiership resumes this weekend after a two week break for the internationals and kicking off things is a tasty Manchester derby between United and City at Old Trafford- a renewal of hostilities between Jose Mourinho and Pep Guardiola.

The two sides were originally supposed to clash in pre-season in China, but that fixture got cancelled and somewhat fittingly, the first new battle between the former Real Madrid gaffer and the ex Barcelona and Bayern boss will take place in the high-pressure cauldron of the Premier League and not in some meaningless friendly

The two Manchester teams are one of three teams to have a 100% record going into Round 4 along with Antonio Conte’s Chelsea. 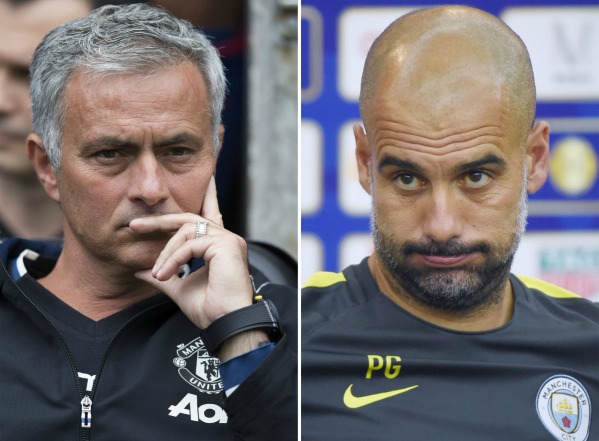 Utd v City- the latest installment in the Mourinho-Pep rivalry

United won the traditional curtain-raiser to the Premier League- the Community Shield, and followed it up with wins over Bournemouth, Southampton and Hull City.

City started off with an unconvincing 2-1 win over Sunderland, then scored four away at Stoke and beat West Ham 3-1 before the international break.

Mourinho has generally stuck to the tried and tested so far in the league- 10 of his 11 players have started all three games. The only exception has been Ander Herrera, who started the first game, and was replaced by Paul Pogba for the fixtures against Southampton and Hull.

At Matchbook, United are slight favourites, not surprising considering they have home advantage and Mourinho’s ability to make his sides almost unbeatable on their own turf.

For City, Sergio Aguero will serve the first of his three-game ban following an elbow to the face of Winston Reid. The talismanic Argentine will be a big loss for Guardiola- he’s already netted six times in four appearances this season. An option could to be throw Leroy Sane into the starting XI but that will be a real baptism of fire for the young 20 year old, who is yet to play a game for City following his £37m summer switch from Schalke. Sane has been plagued by a hamstring problem but has apparently recovered and has been seen training with the likes of Vincent Kompany and Ilkay Gundogan, neither of whom have been seen in a competitive game for City in 2016/17. There is also a potential debut in store for new summer signing Claudio Bravo, whose arrival from Barcelona resulted in England No.1 Joe Hart going to Torino on loan.

Apart from the obvious Mourinho v Guardiola angle, the other important one is the Zlatan Ibrahimovic vs Pep rivalry. The Swedish striker endured a torrid time at Barcelona under Guardiola and has had some less than pleasant words to say about the latter.

Ibra has described Guardiola as a “spineless coward” and has gone on to say, “He’s not a man, there’s nothing more to say”

Not only does the 172nd Manchester derby promises a new exciting chapter in this famous rivalry between Mourinho and Guardiola, but it also does in the one between Zlatan and Pep. The Swedish striker likes the big occasion and what better one to send a message along to Guardiola than the Manchester derby?