With Chelsea, Spurs, Arsenal and Liverpool all dropping points in their midweek clashes, Manchester United have a great chance to make up ground on the top four if they beat Hull City at Old Trafford on Wednesday night.

This is the third meeting between the two sides in three weeks, with United having beaten the Tigers 3-2 on aggregate over two legs in their League Cup semifinal. Marco Silva’s side beat United 2-1 last week at the KC Stadium- their first ever win over United in ANY competition since 1974, and will be now trying to make it two in a row over Jose Mourinho’s men

United winning at Old Trafford would see the gap between them and second place Spurs cut to just three points and would make things at the top very tight indeed. Hull dropped to the bottom of the table after Sunderland picked up an unexpected point against Spurs, but victory at OT will see them draw level on points with third from bottom Palace. 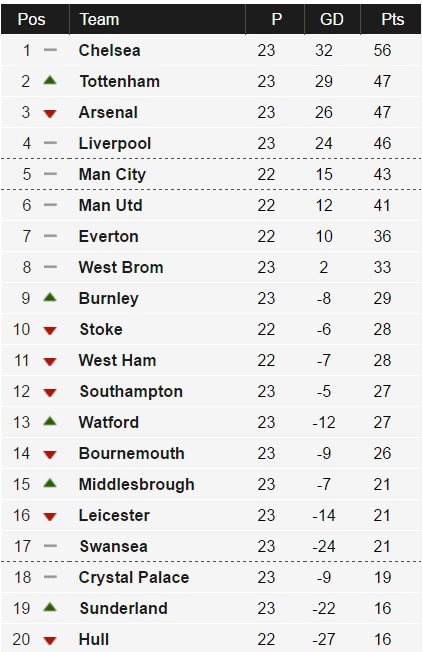 The likes of David de Gea, Paul Pogba, Michael Carrick, Luis Valencia and Zlatan Ibrahimovic were all absent for last week’s Cup trip to Hull but should return to bolster the XI at Old Trafford. Anthony Martial is likely to have to be content with a bench spot despite the two assists to his name in Sunday’s 4-0 win over Wigan Athletic.

While Hull did beat United at home last week, they followed it up with a shocking 4-1 away loss to Championship outfit Fulham in the FA Cup. Hull’s form on the road has been nothing short of disastrous- they’ve lost nine in a row in all competitions away from home going into this clash at Old Trafford.

The Tigers will be also be weakened after the winter sales of Robert Snodgrass and Jake Livermore. They also have a lengthy injury list with defender Curtis Davies the latest one to join the treatment room with a hamstring issue. Andrea Ranocchia has joined them on loan from Inter and could make his bow against the Red Devils.

Given all these, it doesn’t come as a surprise to see that the bookies have the visitors as massive underdogs. BetVictor, for example, have Hull at 17/1 to win at OT (United are at 2/11) and if you fancy Marco Silva’s men to spring an unlikely upset, then check out the former’s free bet offer at www.footballbets.tips.

United are on a 13 game unbeaten streak in the league. The ref for this clash is Lee Mason, who also oversaw the Red Devils’ 2-1 and 3-1 victories at home in December over Boro and Sunderland respectively. Hull’s last game under Mason was a 1-0 away loss at West Ham.