Maurizio Sarri’s position at Chelsea appears to be hanging by a thread after Manchester United beat them 2-0 at the Bridge to knock them out of the Cup. With several other high profile teams like Arsenal, Spurs and Liverpool already out of the competition, the FA Cup was a good chance for the Blues to pick up some silverware, but Solskjaer became the first United manager in nearly seven years to win at the Bridge to set up a quarterfinal tie against Wolves.

Sarri’s results against top four teams this year has not been encouraging- he has lost 3-0 to Spurs, 2-0 to Arsenal, 6-0 to Man City and now 2-0 to Man Utd. It seems he no longer has control of the dressing room and even the fans seem to be fed up of his tactics- with several in the crowd heard saying “F*ck Sarri ball”

Against United, Sarri made his traditional changes, and even when they were 2-0 down, chose not to bring another attacking player on (despite Chelsea having several options on the bench), and instead subbed in Zappacosta. Callum-Hudson Odoi’s reaction on the sidelines, captured in this pic, tell a story in itself.

Sarri can probably redeem himself with a League Cup win over Man City, although few will bet on them given the Blues’ recent struggles under the Italian.

Pundit Chris Sutton called for Sarri to be sacked, and added that lack of action from Roman Abramovich could potentially be seen as disinterest in the club from the Russian. 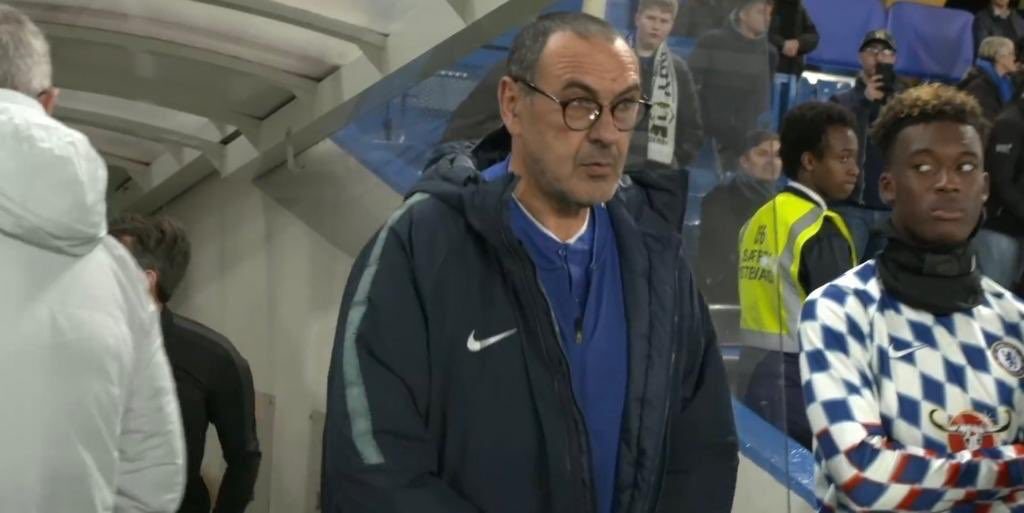