The Italian press wasn’t too chuffed with Napoli’s performance at the Emirates last night. Carlo Ancelotti’s side were expected to give the Gunners a tough fight, but lost 2-0, with Aaron Ramsey (a soon to be Juve player), opening the scoring and Kalidou Koulibaly scoring an own goal. It could’ve been more, but for some fine saves from Alex Meret and profligacy on part of the home side.

Un Napoli Imbarazzante (an embarrassing Napoli) ran CdS. Gazzetta were quick to remind readers that a future Juve player had scored against the Partenopei.

All’s not lost yet for Napoli, especially given Arsenal’s struggles on the road this season, but it will be a tall order for Carlo Ancelotti’s men. 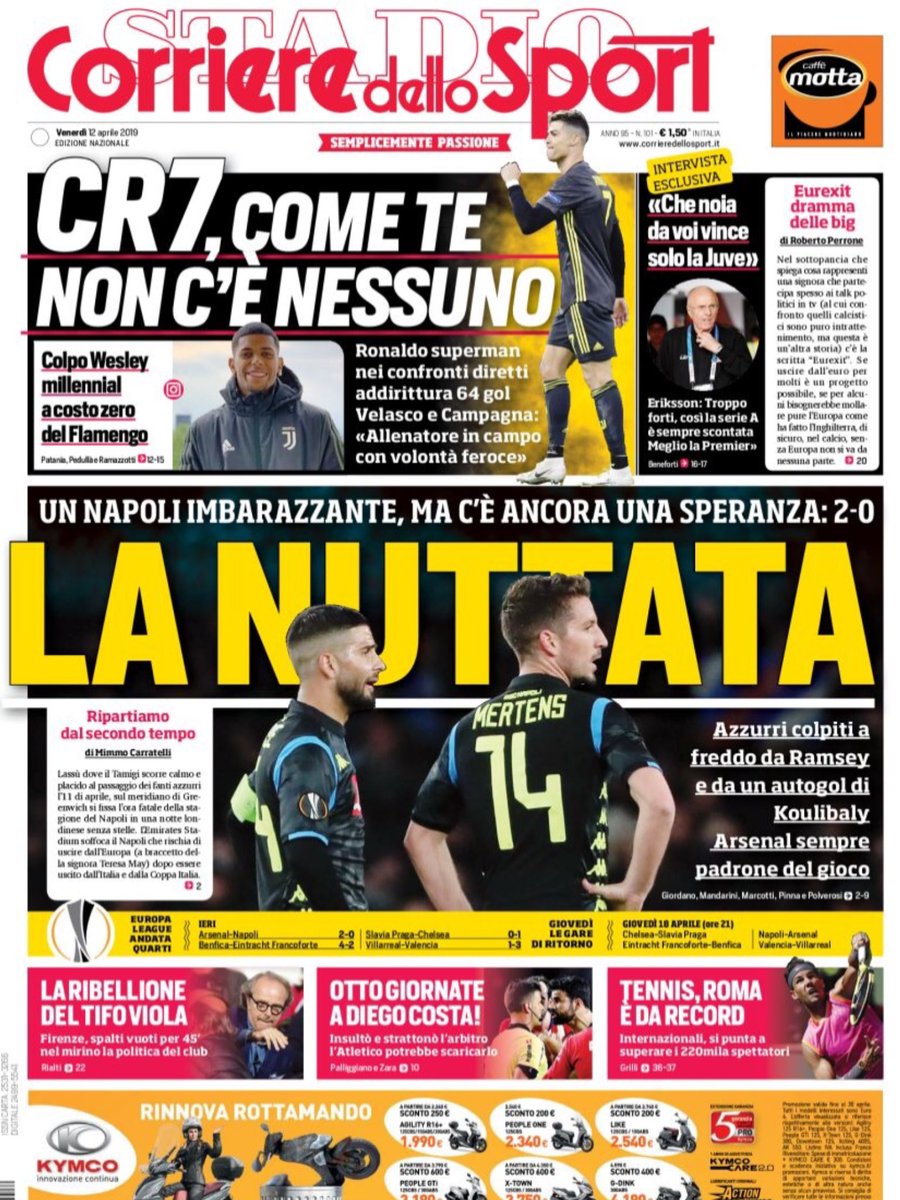 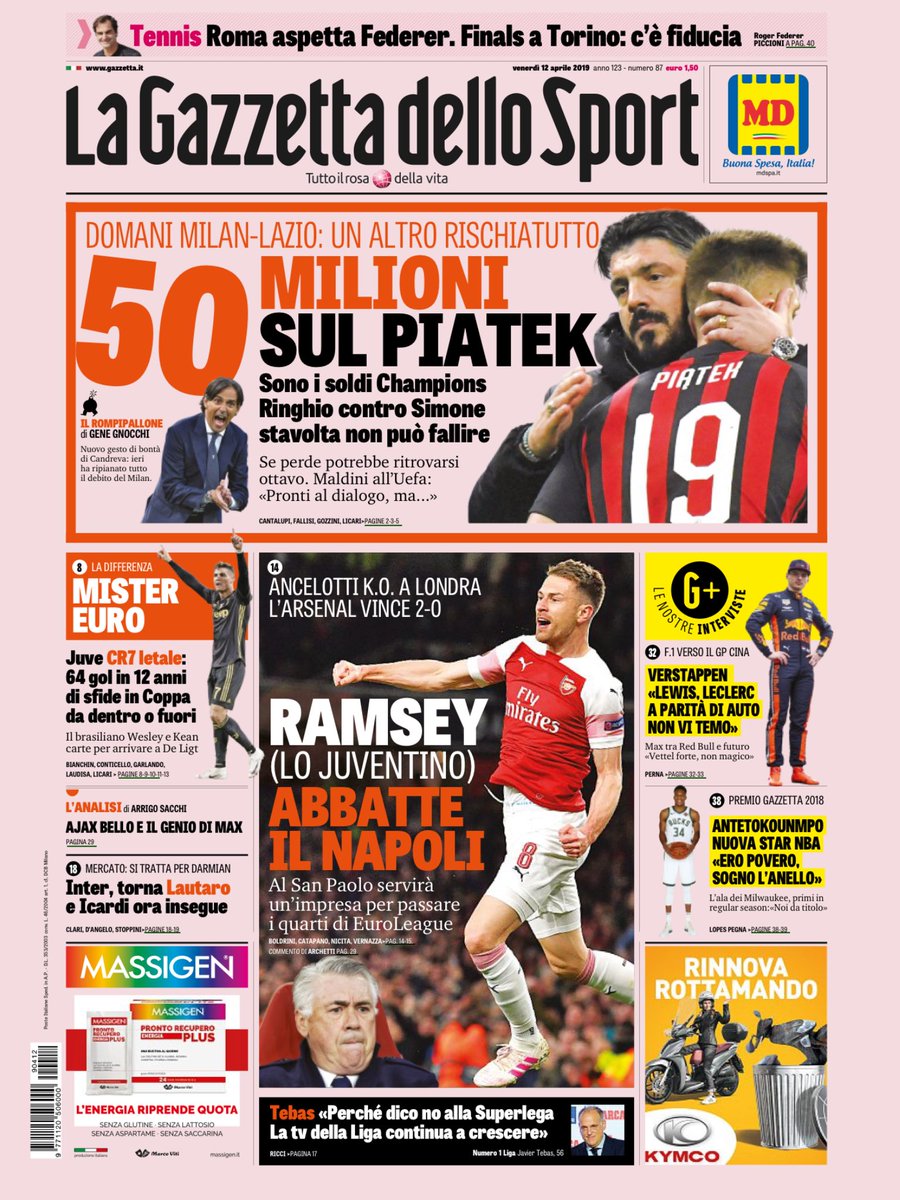 END_OF_DOCUMENT_TOKEN_TO_BE_REPLACED

Is it time for Spallexit? Inter fans may certainly be feeling so after last night, which saw their team crash out of Europe following a 1-0 loss at home to Eintracht Frankfurt. Having drawn the first leg 0-0 in Germany, Inter would’ve been favourites to progress at the San Siro, but an early Luka Jovic goal put paid to their hopes. It’s been a disastrous European campaign for the Nerazzurri, first failing to qualify from a Champions League group that also consisted of Barca, Spurs and PSV (they needed to beat PSV at home on the final match day, but failed to do so!), and now bowing out of the EL in the Round of 16.

The Italian papers, full of praise for Cristiano after his performance against Atleti, were blunt in their assessment of Inter’s exit.

Inter’s exit now means Napoli are the last Italian team left in the Europa League, and they’ve been given tough last eight opposition in the form of Arsenal, who beat Rennes 3-0 at home to overturn a 3-1 deficit from the first leg at the Roazhon. 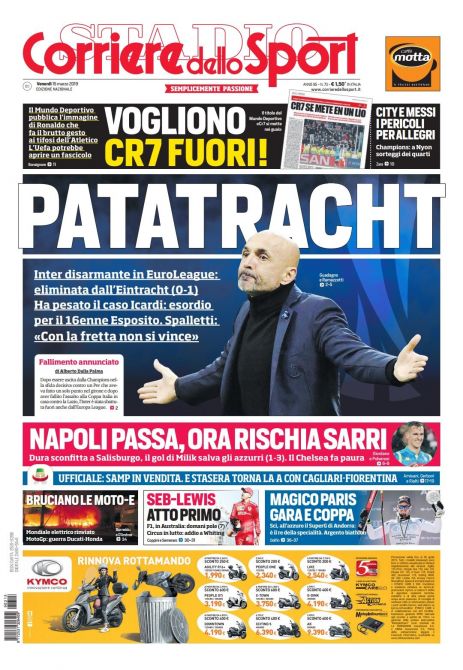 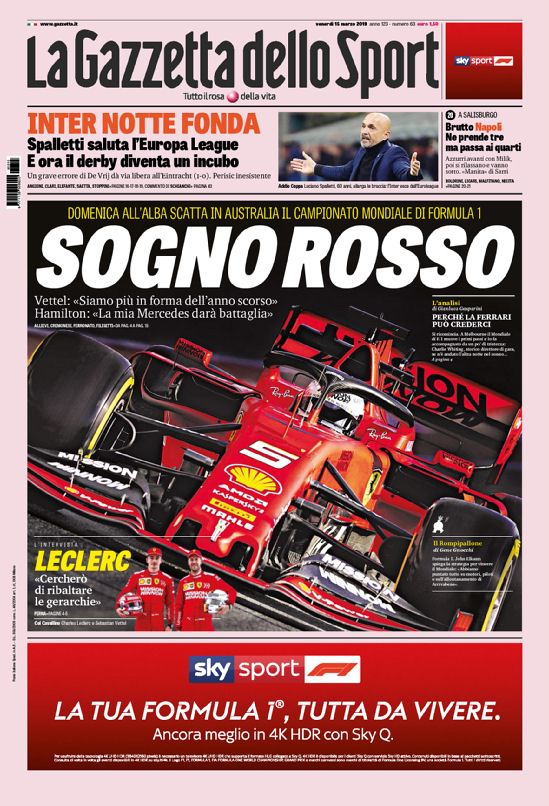 Inter Milan appear to be ready to dig their heels in over the Mauro Icardi issue after the Argentine striker was not included in their lineup to play Sampdoria over the weekend. Icardi, who had been stripped of captaincy earlier in the week, also didn’t make the trip to Austria to play Rapid Vienna in the first of their Europa League knockout tie.

Inter won both games without Icardi by a single goal margin, beating Rapid 1-0 and Sampdoria 2-1. Against Rapid, the winner was scored from the penalty spot by Icardi’s compatriot Lautaro Martinez, while the goals against Samp came from the boots of Danilo D’Ambrosio and Radja Nainggolan. It was a third straight win (and a third straight clean sheet) for the Nerazzurri while Samp slumped to their third straight loss after previous defeats at the hands of Napoli and Frosinone.

Inter will be at home to Rapid for their next game while Sampdoria will travel to Cagliari.