Cristiano Ronaldo wrote himself into Juventus history books with a virtuoso performance that saw the Bianconeri come from 2-0 down for the first time ever in a Champions League knockout tie. Ronaldo’s hat trick, with two fine headers and a penalty converted under immense pressure saw Juve win 3-0 in Turin to send Diego Simeone’s Atleti, known for their defensive steel, crashing out of the competition. It was only the second time Los Colchoneros had lost in the knockout phases of the CL under Simeone- the other time was to Real Madrid when Ronaldo played for Los Blancos.

Check out the Italian papers’ reactions to Ronaldo’s hat trick against Atleti. 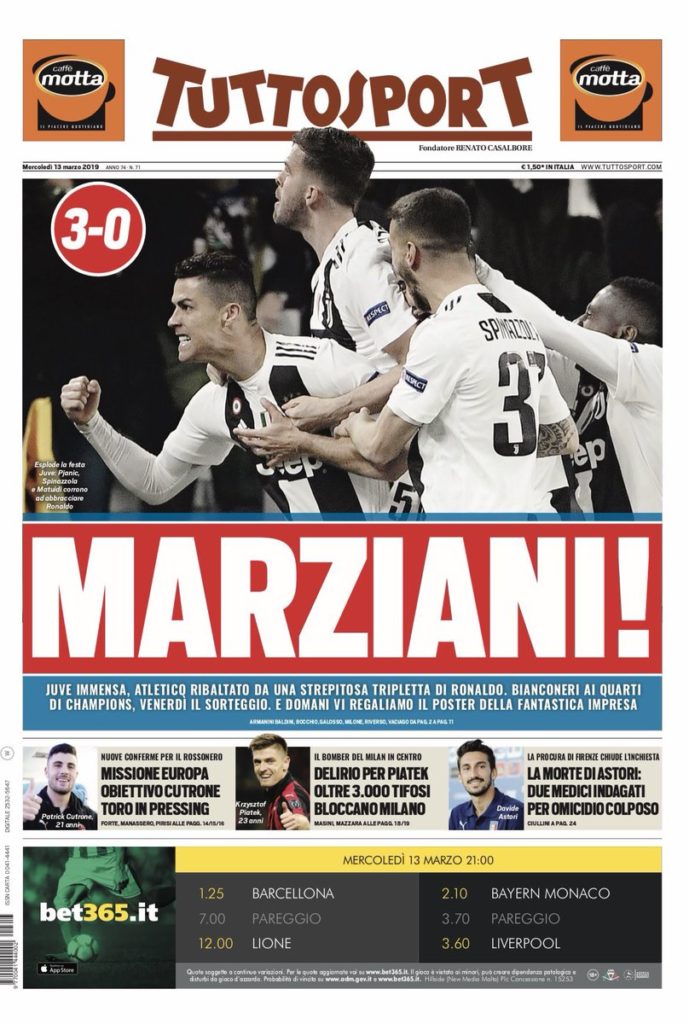 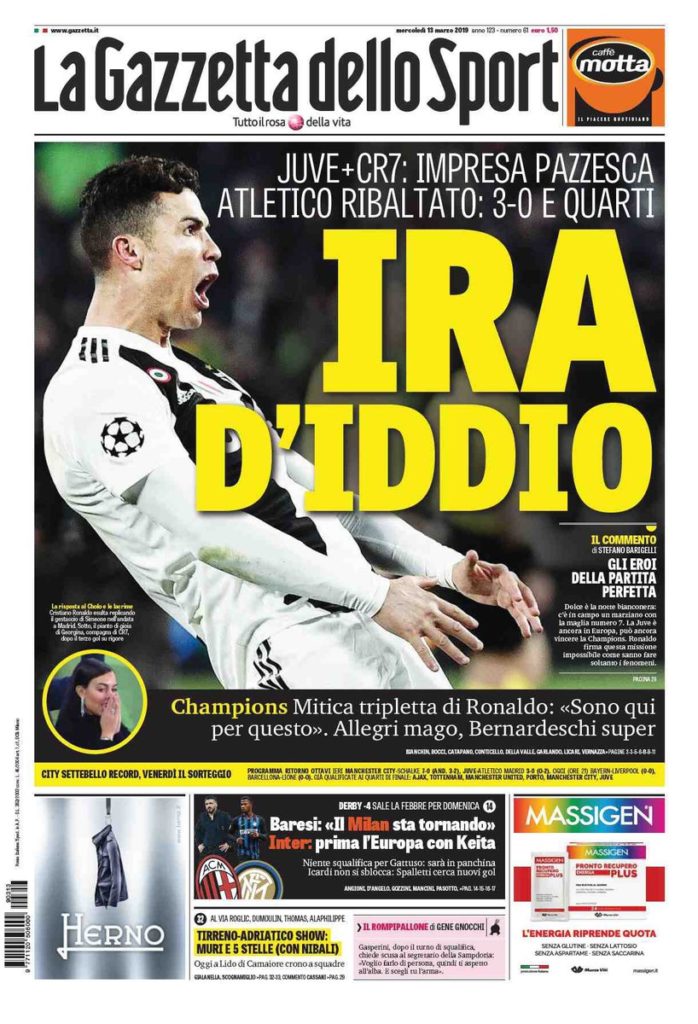 Atleti, as mentioned above, had beaten Juve 2-0 in the first leg. Los Colchoneros were clearly the better side in Madrid- it would require a near flawless performance from Juve to advance to the last eight, and that’s precisely what they did.

Massimilano Allegri’s men came firing on all cylinders and had the ball in the back of the net as early as the fourth minute, but VAR ruled that Ronaldo had fouled Atleti keeper Jan Oblak before Chiellini had converted from close range.

Ronaldo is however a man for the big occasion, as demonstrated during his stint with Real, and we, thanks to this Coral sign up offer, had a punt on the Portuguese star powering his side into the quarters. And he did it in style, with Atleti simply unable to cope with the home side’s constant attacking threats.

The first goal came on 27 minutes through Federico Bernardeschi’s cross, and Ronaldo, such a fine athlete in the air, beat Juanfran to the ball before nodding in. Another cross, this time from the boot of Joao Cancelo, saw Ronaldo double the Bianconeri’s advantage in the 49th minute. Oblak seemed to have done enough to parry that header away, but goal line technology clearly showed that the ball was past the line before the Slovenian got his hands to it.

Substitute Moises Kean missed a glorious opportunity to make it 3-0, but just when Juve fans were beginning to worry about the clock, Bernardeschi stepped up again. He ran rings around Angel Correa, who clipped him in the area in a desperate attempt to stop the winger. Ronaldo, cool as ice, converted the spot kick, and the Juventus Arena erupted.

There were few chances for Atleti’s game- Morata’s header was as close as they came to scoring. If the Juve team didn’t have Ronaldo, Atleti might have still harboured hopes of playing the final at their home ground. A disappointing evening for Diego Simeone and his men. 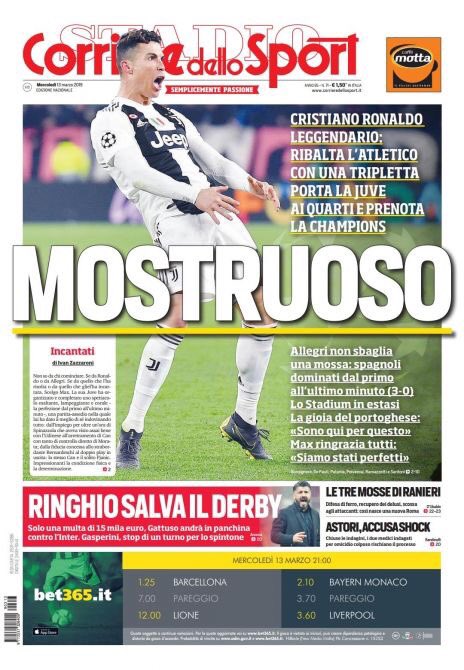 Liverpool will look to make it a quartet of English teams in the last eight of the Champions League by beating Bayern when the two European heavyweights do battle at the Allianz Arena on Wednesday night.

With Man Utd, Tottenham and Man City all beating their respective Round of 16 opponents, Jurgen Klopp’s Reds beating the Bavarians will not only make it four English teams in the quarters, but will also end Germany’s representation in the competition- Bayern are the only Bundesliga side left following exits for Schalke and Borussia Dortmund.

When was the last time four English clubs made it to the last eight of the Champions League?

It’s been almost a decade- the last time this happened was in the 2008/09 season when Arsenal, Chelsea, Liverpool and United all made it to the quarters. That was also the year of that epic Chelsea-Liverpool quarterfinal, which the Blues won 7-5 on aggregate. The tournament that year was won by Barcelona, who are also in action tonight against Olympique Lyonnais. Like Bayern, Barca are also their country’s solitary representatives left following shock defeats in the Ro16 for both Real and Atletico Madrid. END_OF_DOCUMENT_TOKEN_TO_BE_REPLACED

For the third consecutive time in their history, Roma were knocked out in extra time of a Champions League tie, with Eusebio di Francesco’s men falling 3-1 to FC Porto to be knocked out 4-3 on aggregate. Leading 2-1 from the first leg thanks to a pair from Zaniolo, Roma were cautiously optimistic heading to the Dragao, but their poor record in away Champions League knockout games continued as goals from Tiquinho and Moussa Marega took the game to extra time, and then a penalty from Alex Telles sent the Giallorossi out of the competition.

Here’s is the newspaper reaction from Italy to Roma’s exit! Courtesy Gazzetta, Tutto and CdS- the three biggest in the country. 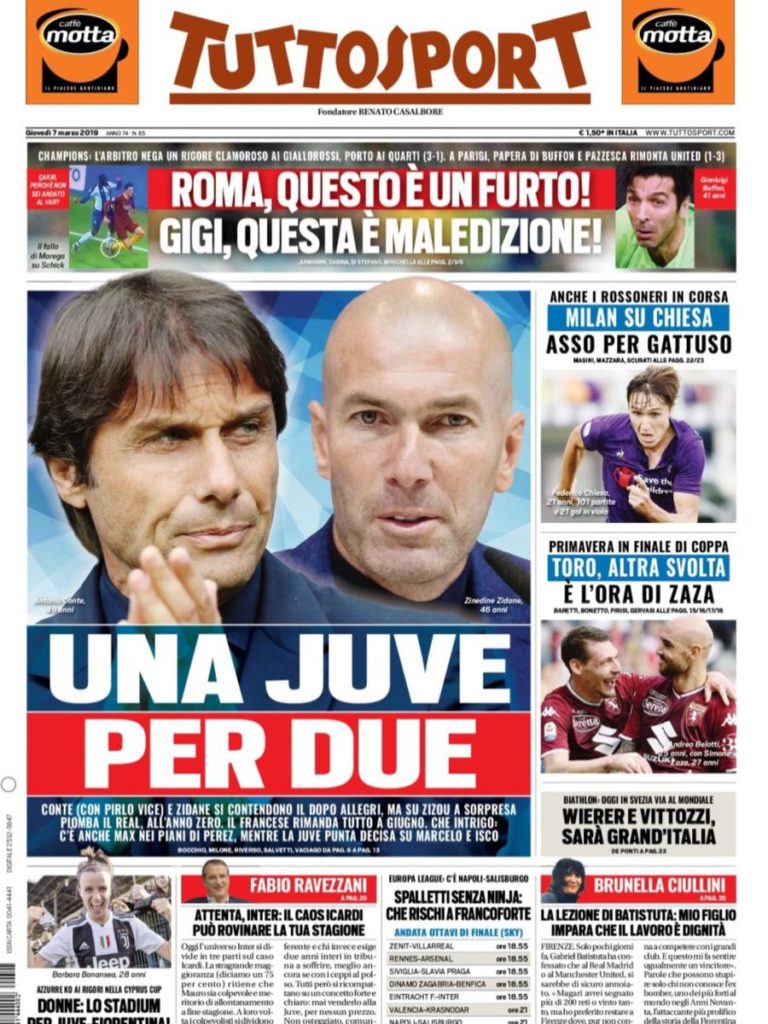 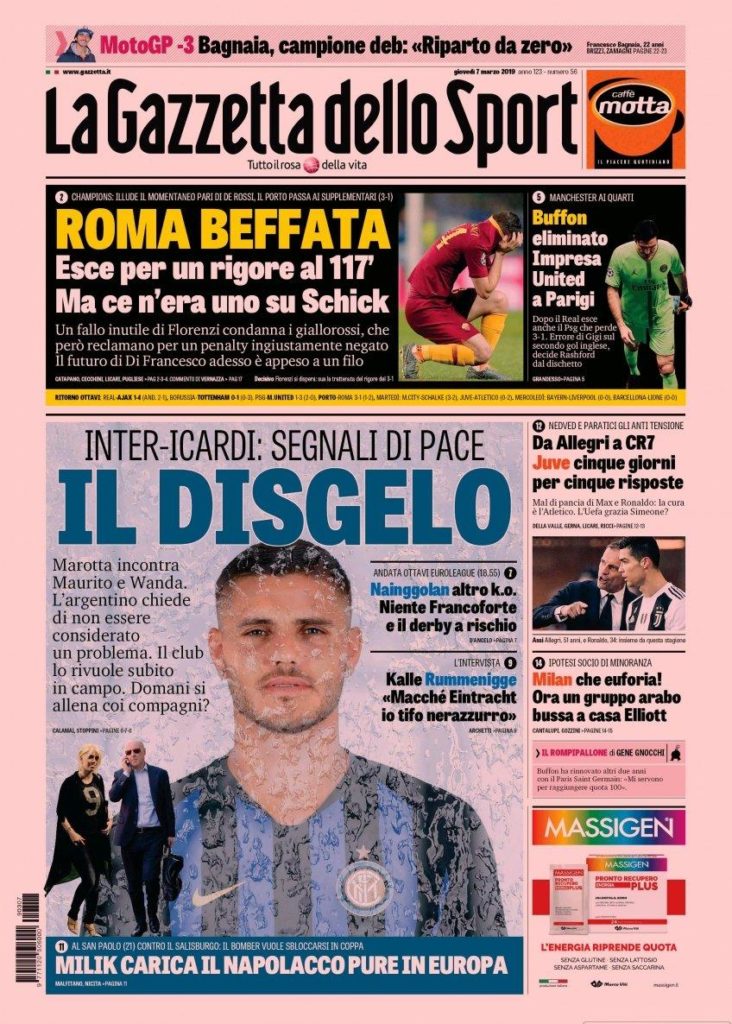 END_OF_DOCUMENT_TOKEN_TO_BE_REPLACED

Bayern Munich fans unveiled this banner, criticising the European away ticket policy of both the Bavarian giants and Liverpool during the first leg of their Champions League Round of 16 tie at Anfield on 19 February, 2019.

The three banners together read

Liverpool fans were in full agreement and voiced their support for the banner.

The game ended in a goalless stalemate, leaving it as a winner takes all clash in the second leg at the Allianz Arena. 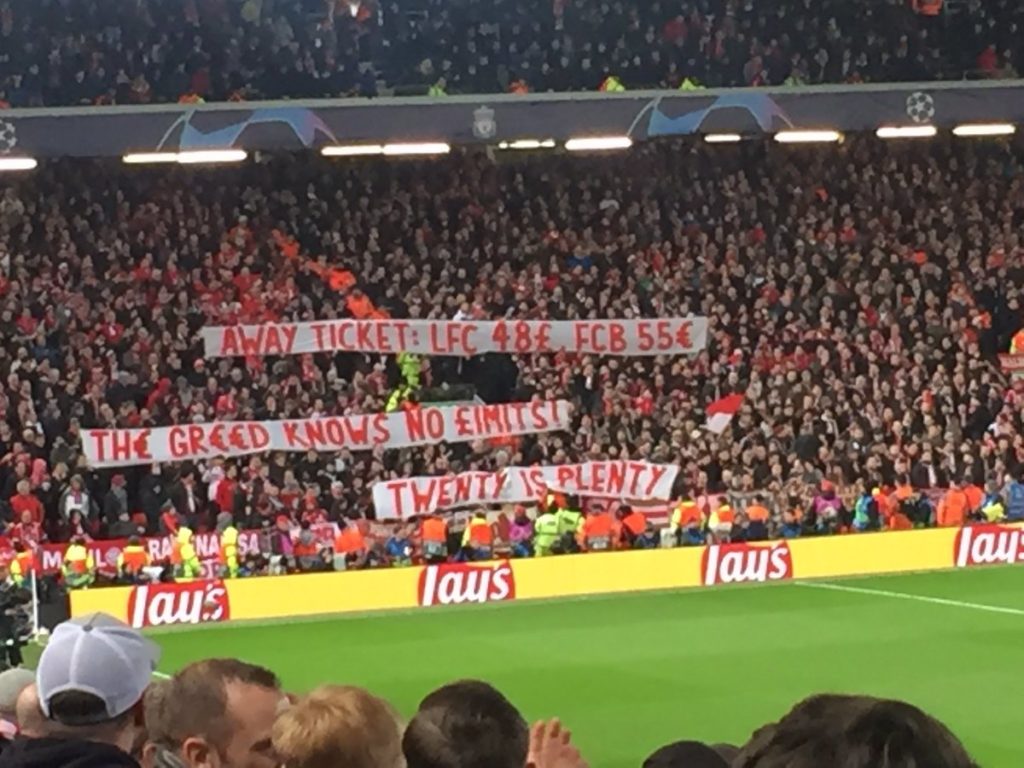